How different will Christmas be from Opening Night?
Clippers beat the Lakers opening night, 112-102, without Paul George

“They’re fully healthy. We get to see a fully loaded team. This is going to be like a championship atmosphere. This is a preview of the Western Conference Finals” – Pierce

“You talking about two of the best duos in the league playing against each other. It’s going to be interesting to see on the Clippers standpoint. I just don’t see that chemistry there. I picked the Clippers to win the title because we really don’t know how healthy LeBron & AD really are” – Perkins

“It was different for me because I was at the end of my career. For George, it’s different. He’s in the middle of his prime. I came there to be a player-coach” – Pierce (played 2 seasons with the team)

Derrick Jones in the conversation for best thrunker ever?

“Get this guy his own shoe” – Pierce

“Fine that man. He has a history of doing that” – Perkins

Ever seen an ankle breaker without the ball?

“This is how you fake back cut” – Pierce

Did Admiral Schofield (Wizards) think he was passing Gheorge Muresan?
Fired a pass about 20 feet over his teammate’s head into the seats

Does this count as a posterization?

That wasn’t the only time:

“That’s a poster on your own guy. He thought the lob was for him” – Pierce

Expect Dion Waiters to be naughty or nice after suspension?
Has been suspended 3 time this season; his latest suspension is over

“He has to be nice. He’s a good guy. We all have flaws and have our moments when things are not going our way. Sometimes, accountability is everything. Dion is so talented. I’m highly disappointed in my boy. He could be out there right now being on the side with Jimmy and they could really be dangerous” – Perkins

“He could add depth to this team, but a lot of this has to do with the other guys stepping up. It’s you, Dion” – Pierce

Is Miami best team not playing on Christmas?

“Yes. I didn’t know how good they would be. They have 3 guys (Adebayo, Nunn and Herro) that you just didn’t know what to expect from them coming into the season. They all are stepping up and making this team a serious threat in the Eastern Conference” – Pierce

“I think that comes down to the person. I wasn’t a sensitive guy. That’s part of sports I feel like. There’s no reason to go into the stands. I never really had a confrontation with a fan” – Pierce

“We got to stop being so sensitive. When you go on the road, you got to expect that” – Perkins

“He’s turned the corner. We’re watching the Russell Westbrook that we saw in OKC. Mike D’Antoni is putting him in position to be successful. And you also got to give credit to James Harden. Russ has the ball in his hands more. The Rockets is the best team and playing the best basketball in the Western Conference the last 3 weeks” – Perkins

“Westbrook reminds me of KG. He’s going to compete. He brings the best out of every guy he’s played with. He never gets the credit that he really deserves” – Perkins

Mark Cuban on midseason tourney: “So Dumb”
Per Bobby Marks, 50% of players in the league earn $4M or less

“Why is Mark Cuban and Daryl Morey the only GMs that always got to tweet out something? But for once, I agree with Cuban. The only thing that matters at the end of the day is getting the ring. Leave it where it’s at. If you want to make some extra money, make it to the playoffs or make it to the Finals” – Perkins

“Say a guy wins six tournaments throughout his career, but never wins a championship, is he hall of fame worthy player?” – Perkins

A Christmas Edition of…

Pierce: Kemba
“He’s having a better. This year, it’s that easy. But don’t take nothing away from the champion, Kyle Lowry”

More to prove on Christmas: Bucks or Sixers?

Perkins: Sixers
“The Bucks have nothing to prove. They’ve already been sold to me. The Sixers have something to prove it. This would be a statement win at home”

Pierce: Sixers
“They were contenders and they got the most to prove”

“The Sixers should be a threat to come out of the East because of just how enormous they are and how good defensively they should be. But you got to prove it against the Bucks” – Nichols

More likely for Harden: Under 30 or over 50?
He has topped 50 points five times this season 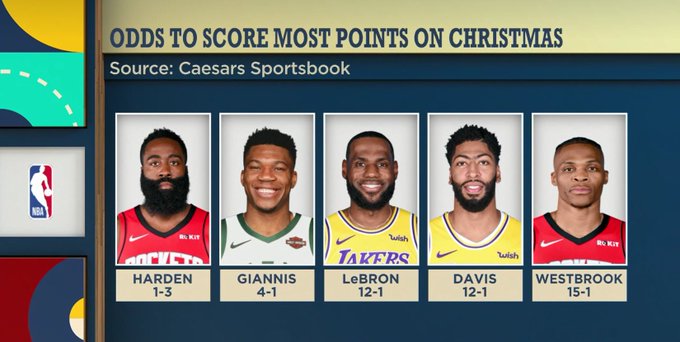 Perkins: Over 50
“He’ll put on a show. This is a get back at Golden State”

Under more pressure to perform: Santa or LeBron?

Perkins: LeBron
“This is a game where he separates himself and have people to quit putting Kawhi Leonard and even Paul George in the same conversation with him”

Pierce: LeBron
“The stage gets no bigger than this outside of the All-Star game and the Finals. People love to play on Christmas. A lot of pressure on this game”