Opener: Rachel is free from quarantine!

How valuable are Orlando exhibition games?

At Lakers practice – and wow, it’s good to be back in the gym around actual NBA basketball for the first time in four months… pic.twitter.com/23RLRGHcJA

“I don’t care if it is an exhibition game or a scrimmage. This is what the guys need. They to be playing against other opponents. You could practice in a squad if you want to, but it doesn’t compare to playing against other players and teams. You got to make sure you get your rhythm right, make sure your offensive sets are going right and your defensive rotations got to be on point. The coaches have to manage their minutes to make sure that they don’t have any injuries” – Perkins

“All of these practices and exhibition games, except for some teams who are short so many players, is important. They need to get their rhythm and chemistry back. Every second of basketball matters right now” – Lowe

NBA coaches working together on plans for exhibition games?

These are largely teams that won’t meet down in Orlando, unless both teams get to the NBA finals

“No. I think it’s cool. This is a situation where everyone is gonna have to lift each other up and make these games useful” – Lowe

“It’s a beautiful thing. That means everyone is working collectively to try to make this thing happen. I love what they’re doing as a whole” – Perkins

“These exhibition games, we need to lower our expectations. It’s gonna look like somewhere in between a glorified practice and regular NBA” – Lowe

“With a 15-man roster, the coaches have to try to find a way to get everybody minutes during these exhibition games because you never know what could happen in this bubble. Not only do you need to get your rotational player minutes, You got to make sure that you prime and prep those guys that are at the end of the bench so that they could be ready to come in and contribute” – Perkins

#12 – Aaron Gordon self-oop off the backboard!

Doc Rivers on the passing of Civil Rights icon and former US Congressman, John Lewis

Mark Cuban: “National Anthem police are out of control”

“I expect people to take a knee or sit down. But at the end of the day, it’s what they believe in. I applaud Mark Cuban for standing behind his players. I’m team Mark Cuban. What he’s saying is right. That’s what we’ve been asking for as players: Ownership support” – Perkins

“Giving NBA players the space, the room to have these kinds of expressions, to make these kinds of statements if they want to, that’s what’s important to me. It’s not whether they do it or not. That is their personal choice” – Nichols

The idea being that you are an NBA player, but when that player walks out his front door, he could be any black man fighting all of the battles that black Americans face against systemic racism. Yahoo! Sports’ Vincent Goodwill reports about 30 other players wanting to follow Jimmy’s lead, but the league has yet to approve that

“Wear your family name with pride. I’m not judging, I’m kind of against it. Don’t take it for granted” – Perkins

“It would look striking on TV to have no name back there [on the jersey]. Why can’t we compromise on this? Will all know it’s Jimmy Butler and tell who the other players are. I don’t understand why this would be out of bounds, but there are so many other things that are going to have to change” – Lowe

2005 – J.R. Smith with the steal and one-handed jam, then soaring high for the one-handed alley-oop jam in NBA Summer League!

This is the league’s call to say that for awards purposes, they only want to count what happened until the night of the NBA shutdown So it is “a fair process for all 30 teams”

NBA determining awards based on games through March 11 | Cool with Orlando games not impacting NBA awards?

“I do. They’ve got a large enough sample size. Not everyone is going to treat these seeding games the same way” – Sedano

“I disagree because, why not? There are a couple that it could affect like Damian Lillard for example. If he gets Portland into the playoffs, he might get third, fourth, or fifth on some MVP ballots, he might have a better argument for first team All-NBA over Luka Doncic or James Harden. That kind of stuff matters in history” – Lowe

“It’s unfair. Guys have an opportunity to audition for these awards and make a strong statement” – Perkins

“In a way, we should have probably known this was coming the way the league was looking at this. They called these last 8 games in Orlando ‘seeding games.’ They’re really not looking at these like an extension of the regular season, they’re looking at them as in preparation for the playoffs” – Nichols

Lowe: Giannis
“It’s almost impossible to make any kind of statistical case for LeBron, as great as he is. In most other seasons, LeBron wins MVP. And that the Bucks have the best record in the NBA”

Sedano: LeBron
“I think he’s the overall better player than Giannis. He makes guys around him better”

Perkins: LeBron
“Giannis is the most dominant player. The Most Valuable Player: LeBron James. Where was this same energy when he was in the East? But now the narrative changed when it comes down to Giannis. I have a problem with that”

Scenes from inside the NBA Bubble by Malika Andrews

Expectations for Ja in Orlando? 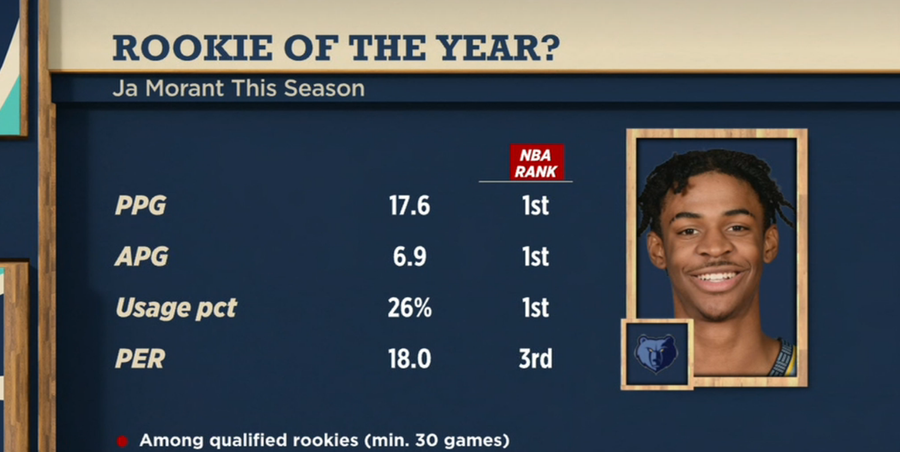 “They’re the same. He has not let me down since he was in college. I wouldn’t have been mad if the Pelicans drafted him No. 1. This kid is on a mission” – Perkins

“He is one of the most electrifying players in the NBA already. He’s so far ahead of the curve for rookie PGs” – Lowe

“I want to see the 12 pounds [he lost] and for him to take that bump as he goes to the rim. How much more impactful can he be with that added weight because he’s going to be stronger and have that ability to take the contact as he goes to the rim? He’s not gonna bow out of the 8th seed that quickly” – Sedano

“It’s almost like he has 2nd year knowledge and a 2nd year body, I’m also really interested in the trash talk!” – Nichols

Better bet for 8th spot in West: Grizzlies or the field? 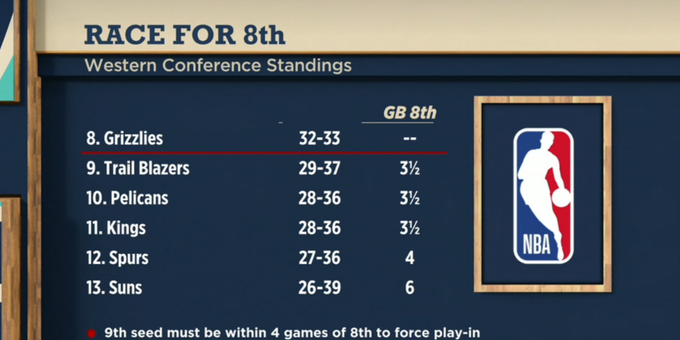 Lowe: Grizzlies
“I have faith in this team. Their players are healthy. They have to go 3-5 or 2-6 for the play-in and maybe even hold the eighth seed”

Sedano: Blazers
“I still think that the Grizzlies will get into that play-in situation and most likely it’s against this team. At full strength, they would be able to take that 8th seed away from Memphis”

Perkins: Grizzlies
“If I’m Memphis, I’m taking these 8 regular season games very seriously because I’m going to approach each one of them like they’re a playoff game so I could get separation. But when I’m looking at the teams down the line, The team to keep a close eye on: Spurs. You can never underestimate the great Gregg Popovich. I had the Pelicans, but Memphis is not going anywhere anytime soon”

“They will both do great. I just hope T-Mac doesn’t forget about us and The Jump family” – Perkins

The Kings have already had four players test positive for coronavirus, one player unintentionally break the rules for the bubble and he’s still in quarantine

“The shame of it is they’re sneakily a good candidate to get into the play-in. Their schedule is pretty manageable. But it’s a shame” – Lowe

“The referees can hear what players are saying because you see, we like to talk behind their backs. But they can actually hear us now. So there’s going to be a lot more T’s. Should be the only difference.” – Steven Adams

“For a guy that led the league 3 straight years in techs, I’m glad that I’m not down there! Adam Silver is going to have to have a meeting with the refs and tell them to keep a cool boot and have a little leeway. They got to understand the circumstances. We want to hear the noise talking. The refs can’t be too sensitive” – Perkins

“NBA refs are pretty damn good at their job. They’ll be able to take it. Will have a non-issue” – Lowe

“It’s not just that referees are going to hear, everyone is going to hear. I wonder if the refs could just walk away from being openly disrespected on National TV?” – Nichols