Can Steph please come back?

Better test in playoffs for Lakers: Pelicans or Grizz? 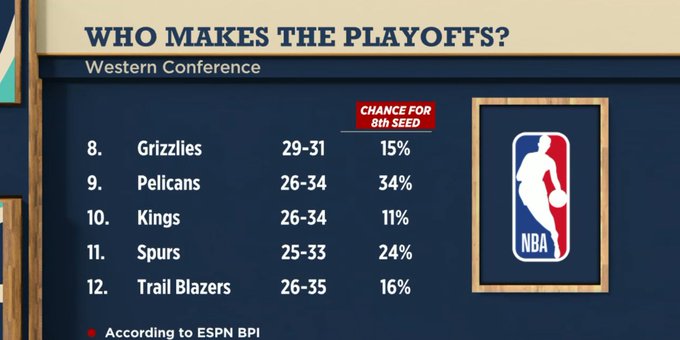 “Lakers/Pelicans. That would be the better test for the Lakers because they’re a better team. Figuring out the Zion situation is going to be something that they need to do” – Yates

“If the Pelicans come back and make the playoffs, Zion could steal that Rookie of the Year award from JA” – Yates

Gentry: “Amazed” if anyone other than LeBron is MVP 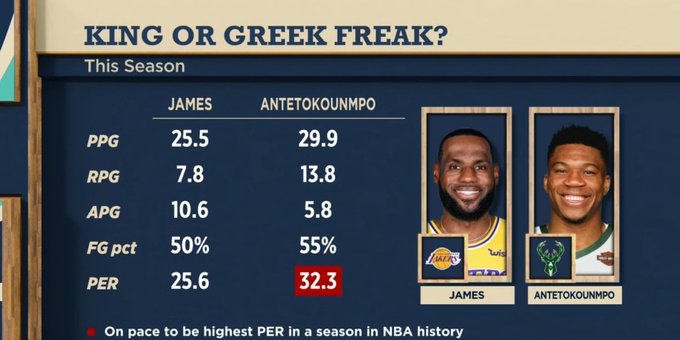 “I’m buying it because sometimes you don’t know how to define MVP. LeBron checks both boxes. LeBron is the reason that makes that team go and it’s pretty fantastic to watch” – Yates

“I have felt like Giannis has been the leader in the clubhouse all season. It is historic what he is doing” – Nichols

OTD in 2004 – Vince Carter with the monster one-handed putback dunk on the Miami Heat!

Jokic holding his own personal combine?

It’s all fun and games until someone tells Elway there’s a seven footer with a cannon and he’s already in Colorado https://t.co/NNSL5J60Fi

Is this what happens when you poke the bear?

“He has been on a tear all year long” – Shelburne

Should flexing be encouraged after a dunk like this?
Grant got T’d up after taunting

“It gives him a little something” – Yates

Have you recovered from the Rockets/Celtics game yet?

Paul Pierce couldn’t have been happier if he had scored that game-tying bucket himself 😂😂😂 pic.twitter.com/OvIqqzNp53

Leon Rose officially named Knicks president
Was previously the agent of Joel Embiid, Chris Paul, Carmelo Anthony and so many others

How do Knicks start the rebuild?

“Get some players. They need some talent on that team. It’s easier to get players as an agent because all they’re doing is signing with you and asking them to represent you. This is different. To get players in the NBA, you have to be strategic, you have to leverage, you have to plan years out. This is about a long process and it’s going to be a hard task for him” – Shelburne

“If you want wants to believe any of this nonsense, you have to show your face. He’s got to find a way to get himself in the public eye. The visibility of this job is an important one considering how big of a franchise the Knicks are and how terrible they’ve been for so many decades” – Yates

Is Zion already unguardable?
Career-high 35 points vs the Lakers

Clippers scored 136 points vs the Sixers

“If the Clippers are going to win this year, defense needs to be their identity. I’m glad that they feel good about their offense, but that’s not how they’re going to win a championship” – Shelburne

“The thing about their defensive players that makes them so good is that they’re actually quite tremendous on offense as well. To me, it looks so good. ” – Yates

“He’s been better since he got the snub. That’s okay. This has been the lone storyline in Washington about what the season is. There’s nothing wrong with using a All-Star snub as motivation” – Yates

“When you just get in the rhythm, that rim starts to look bigger and bigger and every time you put it up, you feel like it’s going in. It’s a lot of fun” – Milton

How did you react to being told you were out of the rotation?

“It’s tough, but it’s about staying ready. Then I got my opportunity and I just tried to make the most of it” – Milton

“My teammates do a really good job of encouraging me” – Milton

How did G League help you get ready for this run?

“Were working on it. With a lot of controversy going on, our spirit is really well” – Milton

How did you get the name “Shake”?
Real name is Malik

“My dad in college played basketball and they called him, ‘The Milkman.’ They said he delivered it right to your doorstep. When I was with my mom, they just used to say, ‘How’s little milkshake doing?’ And Shake just stuck around so I’ve really been called Shake my whole life” – Milton

On playing at SMU and being coached by Larry Brown:

“That’s my guy. We still talk regularly. He was always on you tough, but at the same time you knew that he was going to take care of you and he treated you like family” – Milton

When you dunked on Pat Bev?

“Just trying to make a play. I got pretty long arms” – Milton
Wingspan: 7’1

When you played in G League & NBA on same day?

“That was fun. Especially being in the G League as a two-way guy, whenever your opportunity is called, you want to be ready. It didn’t matter how many minutes I had just played. Got no time to be tired in that situation” – Milton

OTD in 2007 – LeBron James driving to the basket and finishing with the double pump dunk on the Mavs!

Waiters LA Island
Would Dion Waiters be a good fit with Lakers?
Lakers waived Troy Daniels to open up a roster spot

Unicorn Sighting
Is the Unicorn officially back?
KP: 38 pts, 13 reb, 5 blk vs Timberwolves

More likely than not Bucks get 70 wins?

“No. Not because I don’t believe in the Bucks, but just because as we get deeper into March and April, why would you play your guys? Schedule some rest” – Shelburne

“It matters to their fanbase and to this team. They’re going to try to get it” – Yates