Amin Elhassan (Second Half Only):

Tatum’s hot streak changing your view of Celtics?
Had 33 points, 11 rebounds in a win over the Jazz in Utah

Tatum after the game:

“This was big for our team. This is a tough place to play. It’s a great way to end a road trip. We could have made excuses on a back-to-back, but we didn’t”

“I already thought the Celtics was a dangerous team from the beginning. You’re watching a kid who every year at this time of year takes a huge jump. This is what he does. If he could continue that trend of taking those kind of jumps, I would not want to deal with the Celtics in the playoffs” – Fizdale

“This is a top 10 player in the NBA. Jayson Tatum playing like this can be the best player on a championship team” – Lowe

“He’s the kind of guy that after he plays a game, he goes back and he watches his own film alone. He’s a student of the game” – Fizdale

“I don’t think it’s a 100% coincidence that this super rise started almost right when he got named to the All-Star team. That took some pressure off him because I think Tatum was pressing a bit” – Lowe

How cautious should Celtics be with Kemba?

“They should be very cautious. They are a legitimate contender. If Kemba Walker is healthy, they have a much better chance. If I’m the Celtics, I’m taking my time and making sure he stays in shape, but at the same time were not aggravating it” – Fizdale

“They can afford to be very cautious. To Danny’s point, to win the title and four playoff series, you’re going to need all those guys to be at their best” – Lowe

OTD in 2004 – Baron Davis with the nasty one-handed jam on Jermaine O’Neal!

Getting crossed up worse than being dunked on?

This Derrick Jones Jr. play more impressive than his dunks?

“He goes against everyone” – Fizdale

“Their best lineup has been the alternative version where Conley is coming off the bench and Ingles is starting. They’re caught between different kinds of identities” – Lowe

“The Rockets are keeping the paint empty so that James and Russ can operate. They knew they get a much more effective Russell Westbrook when they space the floor like that. This is not a fluke” – Elhassan

“What you’re starting to see now is a team that’s starting to gel after the trade [of Clint Capela]. They’re just really starting to figure it out” – Fizdale

“The Rockets are really good!” – Lowe

“They’re just trying to figure everything out. Once that team comes together and they really start to click, you’re going to see a really good solid tough defensive basketball team that can play up and down the floor. I think they’ll be dangerous down the stretch” – Fizdale

“They’re more clearly a step behind Toronto and Boston” – Lowe

“To me, the problem started before the trade. They’re not defending with the same kind of fervor energy they had earlier in the year. The other thing, the three-point shooting which was elite elite has come back down to earth to still really good, but that’s the difference” – Elhassan 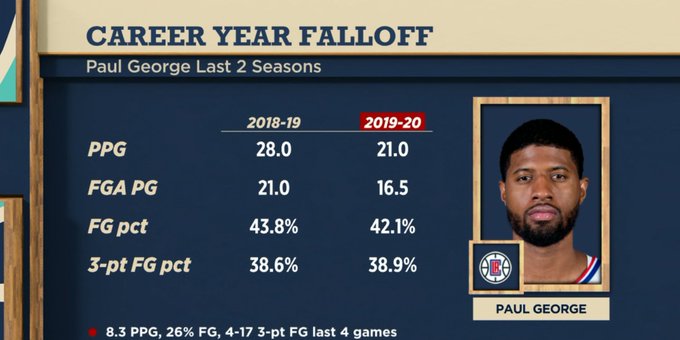 “He hasn’t been 100% healthy. This is something that’s going to get figured out by the time we get to the playoffs” – Elhassan

“He’s been in and out of the lineup. He is Paul freaking George!” – Lowe

“No one ever doubted his ability to score and rebound. The most impressive thing: Defensively, he’s made huge strides. He’s trending exactly the way you would want him to be” – Lowe

“As that team grows, you’re going to see him get better and better and a lot of that is going to be because of his improvements. He’s a big time talent and making some big strides defensively. You’re not going to see crazy numbers out of him, but I do think you can see a consistent double-double coming from this kid throughout his career” – Fizdale

ESPN’s 5-on-5: Can LeBron catch Giannis for MVP?

Worried about 76ers after Embiid’s injury?

“Yes. If either Embiid or Simmons are damaged going into the playoffs, they’re in huge, huge trouble” – Lowe

“We were worried about the Sixers before the injuries. With Embiid’s injury history, you got to be concerned with that and hoping that Ben Simmons isn’t as bad as it can be. This is a bad time for them to sustain these kind of injuries if they’re trying to get home-court advantage” – Fizdale

“Shake Milton took more shots than Tobias Harris (13 shot attempts) vs the Cavs. As not only a max player, but an offensive talent in this league, that is unacceptable. I got to put some of it on Brett Brown for not making him aggressive” – Elhassan

Cavs: 3-1 since J.B. Bickerstaff took over as HC 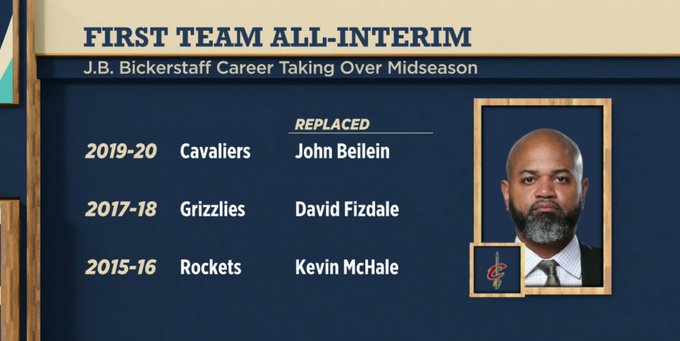 “One, it speaks to him in the way he’s leading the team. J.B. has been through this. He understands how to take over a team mid-drift. This young team fits his personality. I don’t know if they can play at a 3-1 level throughout the rest of the year because they are a young team, but I do think they’ll play consistently hard, be organized and prepare for every night” – Fizdale

“Sometimes, you just got to ride what’s hot” – Lowe

A bonus Jump Recommends, as suggested by Amin:

Black coaches in the NBA by Vincent Goodwill (Yahoo! Sports)

OTD in 2005 – Steve Francis splitting the double and soaring high with the monster one-handed jam on the Miami Heat!

Night Off
LeBron out vs Warriors (Sore left groin)

“Him only missing three games on the season at this age and that many minutes logged, this is important to this guy that he ends up making an impact on his team and putting them in the best situation” – Fizdale

Salty Lake City?
Does Utah have the saltiest fans in NBA?

Westbrook was asked about what JA said after the game:

“I think we take it for granted. We’ve gotten spoiled and gotten used to it” – Fizdale

“Sometimes, we don’t appreciate all the different things he does for the team” – Nichols