Ever see a fake teammate block before? 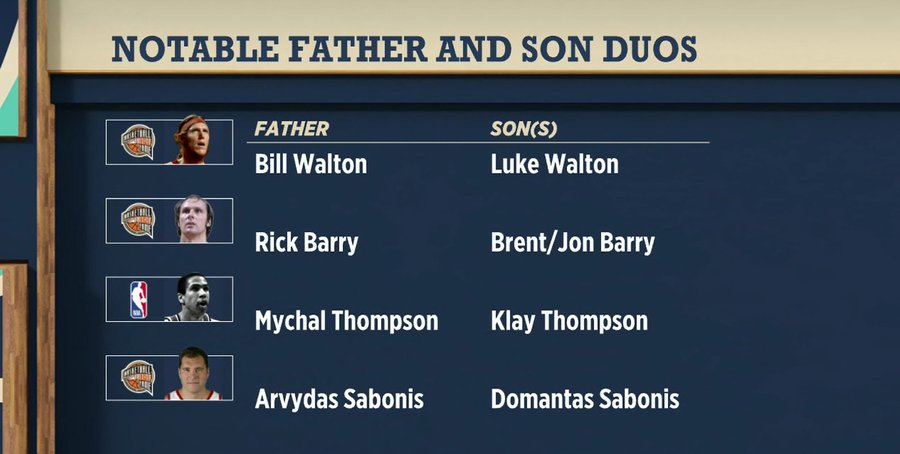 Other notable father and son duos:

OTD in 2007 – Corey Maggette knocking down the half court hook shot at the buzzer to end the quarter!

Saturday night vs the Thunder:

Which team is lower right now?

“They’re competing each other” – Ogwumike

“It’s an issue of intention” – Arnovitz

Did Spencer Dinwiddie’s teammates know he could do this?

Sixers capable of winning without Embiid? 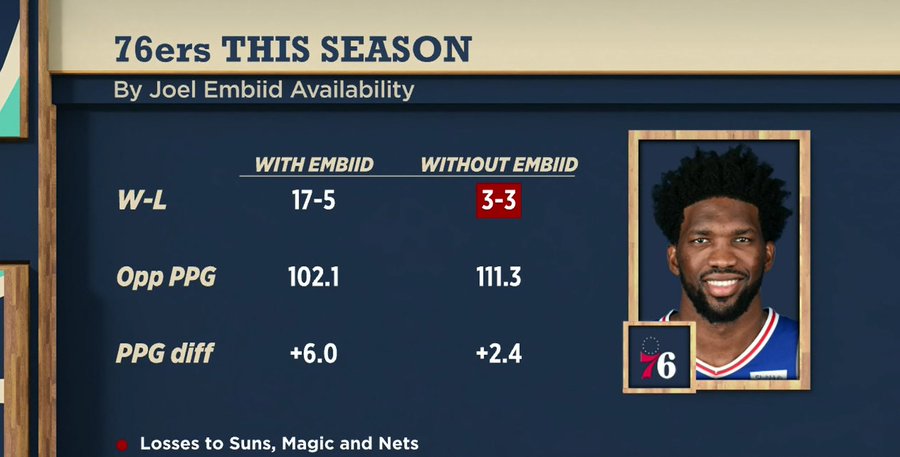 “Theoretically, Philadelphia should be a team pretty well-equipped. I don’t think they could achieve their potential without Embiid, but their offense has been a little congested. They’re going to have to get shooting” – Arnovitz

“This underscores the value of Joel Embiid. Were realizing when he’s not there, they need him, not just offensively, but defensively. I feel like we need to take the pressure off him because I think he realizes he needs to be that guy they need in the playoffs” – Ogwumike

Smart for LeBron to try and play as much as possible?
Played his 27th straight game Sunday night

LeBron’s desire to play every game he can (Via Spectrum Sportsnet): 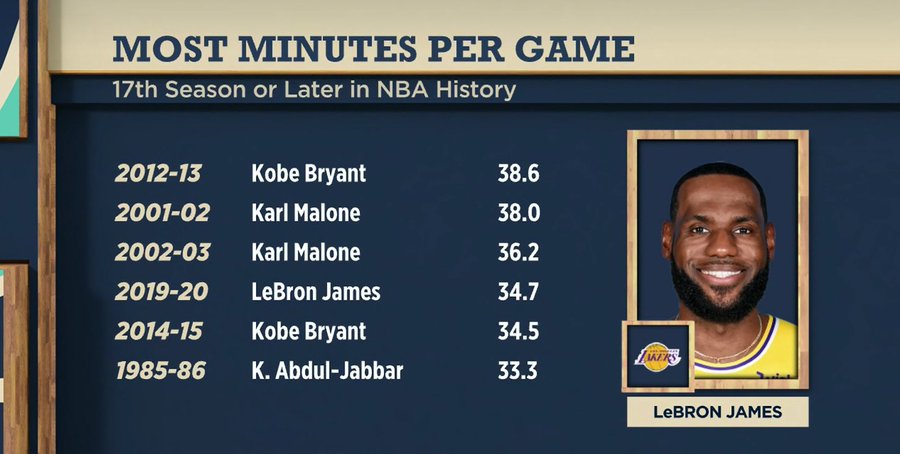 “If they’re able to, they should be able to. For him, it’s now or never. This is the chance you have to win a championship” – Ogwumike

“I’m gonna watch for March. I suspect that come late March, we will see a little less LeBron” – Arnovitz

“I have not seen him play this level of defense and this hard in the last 4 seasons. He hasn’t played like this since Miami” – Nichols

“All athletes know: We sort of model our strength and conditioning exercises at LeBron” – Ogwumike

How does Luka’s injury affect Mavs season outlook?
May return to action in two weeks, per Tim MacMahon 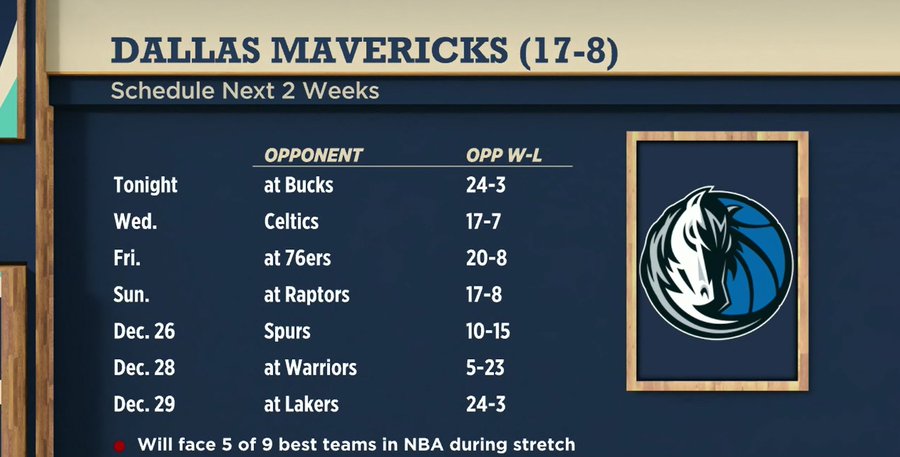 How real plus-minus can reveal hidden stars by Kevin Pelton

What is Real Plus-Minus? It’s one of those all encompassing player performance metrics

“He’s so much more intuitive this year. There’s better decision making, he’s got a feel and also defensively. One of the things that RPM does is it does help us quantify defense. He’s really more aggressive” – Arnovitz

“He has let the game come to him. He’s picking his points and spots. I really like Kemba Walker. He’s a good complement to Jayson Tatum, offensively. He knows when to get him the ball. Offensively, I like the Kemba/Jayson combo and I like the defensively Jaylen/Jayson combo” – Ogwumike

Should Thunder buy or sell this season?
More than 90% of the players in the league are now trade eligible 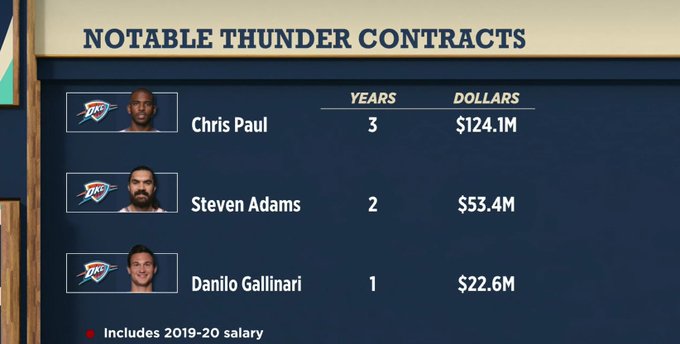 Per Woj: He does not expect CP to be moved by OKC this season

“I’m in rebuild. In the time being, everyone else, you can sort of see what the value is there and to try to get young players. Chris Paul, even if he’s a guy that remains, it’s not bad. He can help mold the young guys until you can put him in a position where he’s better off” – Ogwumike

“OKC has this challenge: They have too many competent basketball players to outright tank and they’re probably not good enough to contend. It’s going to be situational for them Danilo Gallnari is a guy that you can move (Not Adams or Paul)” – Arnovitz

OTD in 2012 – Damian Lillard stepping back and hitting the game winning bucket from behind the arc to beat the New Orleans Hornets!

Markelle Fultz
Redick: Fultz “In a good place both mentally and physically” – rather have Fultz or Lonzo right now? (Per Josh Robbins/The Athletic) 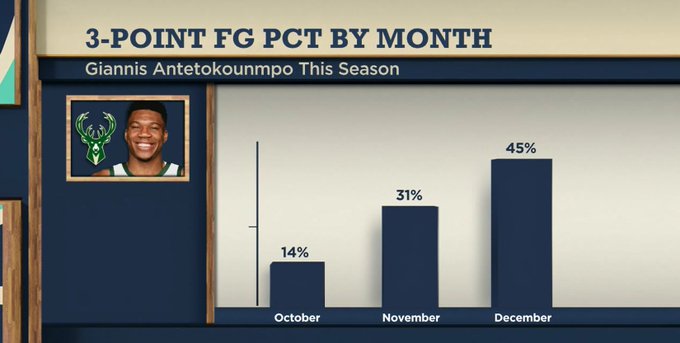 “It is just by nature of how successful they were last year. This is a team that is actually preparing for the playoffs as they play each and every game. They have a tremendous sense of urgency this season” – Ogwumike

“I think the attention has largely focused on Giannis. He’s the MVP and he’s putting up better numbers than he did last season”

“The performance caught up to the potential. It’s a complement to them. No one is under the impression other than this is the best regular season team in basketball” – Arnovitz