“He Got Game. That’s a classic” – Pierce

Monologue: The West isn’t exactly what we thought it would be

What’s the missing ingredient for Nuggets?

“The leadership. Who’s the leader and on voice that team?” – Pierce

“They need another star. Somebody has to help Jokic on the floor” – Friedell

“The Nuggets have the depth, but they’re not sneaking up on anybody. Porter Jr. has star potential, eventually. The improvement from them has to come from within” – Pierce

Who’s the second-best team in West? 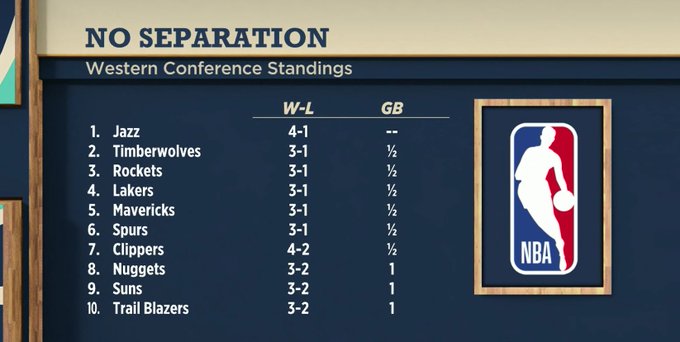 “Lakers. They still got a lot more upside. AD has been great. He has been dominant” – Pierce

“Jazz. They have the pieces to push pass everybody else, but no one is beating the Clippers if they are healthy” – Friedell

OTD in 1996 – Shaq blocks Rex Chapman’s floater off the glass so hard that the cameras went out!

Was Cam Reddish a ballerina for Halloween?

“That was ugly” – Friedell

Should they make Zion watch from locker room?

😂😂 Rook got to take that one https://t.co/QbhiDZ2qCr

How should this be scored in the box score?

“That’s nice though if you can do that” – Pierce

“Ben Simmons should have gotten suspended too” – Pierce

“I’m fine with the suspensions as they were” – Nichols

“The bigger question for me moving forward: What kind of impact does this have on KAT and what he says?” – Friedell

Paul, how are you feeling about Celtics right now?

“I’m feeling good about them. They could be a threat if Tatum steps up” – Pierce

What makes you such a big fan of Call of Duty?

“I’ve always been passionate about it. It’s fun” – Gurley

“Talk is cheap. You know my handle” – Gurley

Like Rams chances to get back to the Super Bowl?

“It’s all about at the end of the season. You got to keep pulling away. Will definitely get it together” – Gurley

If I Call You Brudda Then You My Brudda‼️#HeDunkedOnMeInHighSchool #Tarboro #Princeville #252 pic.twitter.com/JemguBMspz

“I’m a Clippers guy. Montrezl Harrell is my guy” – Gurley

Steph Curry undergoes surgery to hand, out at least 3 months

More likely to drop 40: Harden or Kyrie?
The O/U is 243 and 1/2 in this game according to Caesar’s sportsbook; the highest for any NBA game this season

Pierce: Harden
“Go place your bets. He’ll have at least 45”

More likely to drop a triple-double: LeBron or Luka?

Friedell: LeBron
“When he decides to dominate, nobody is stopping him”

Cozy Life
Coach Pop: “I just wish we were in sweatsuits”

Spurs’ Gregg Popovich on his dream dress code for NBA coaches: “I just wish we were in sweatsuits. I’m a big proponent of gym shoes and nice looking sweat suits so you don’t have to worry about ties and coats and all that stuff.” pic.twitter.com/RlgAXIn6YA

Growing up
Biggest reason for Ingram’s improvement this year?
Had 25 points in a Pelicans win

Speaking of the Kings, it’s the latest edition of:

What needs to change for Kings to get a win?

Paul, remember when you hit this ref by accident?