“Just as athletes, we’ve seen this too many times” – Jefferson

Kerr on Game 5 win: “Our boys are [expletive] giants” 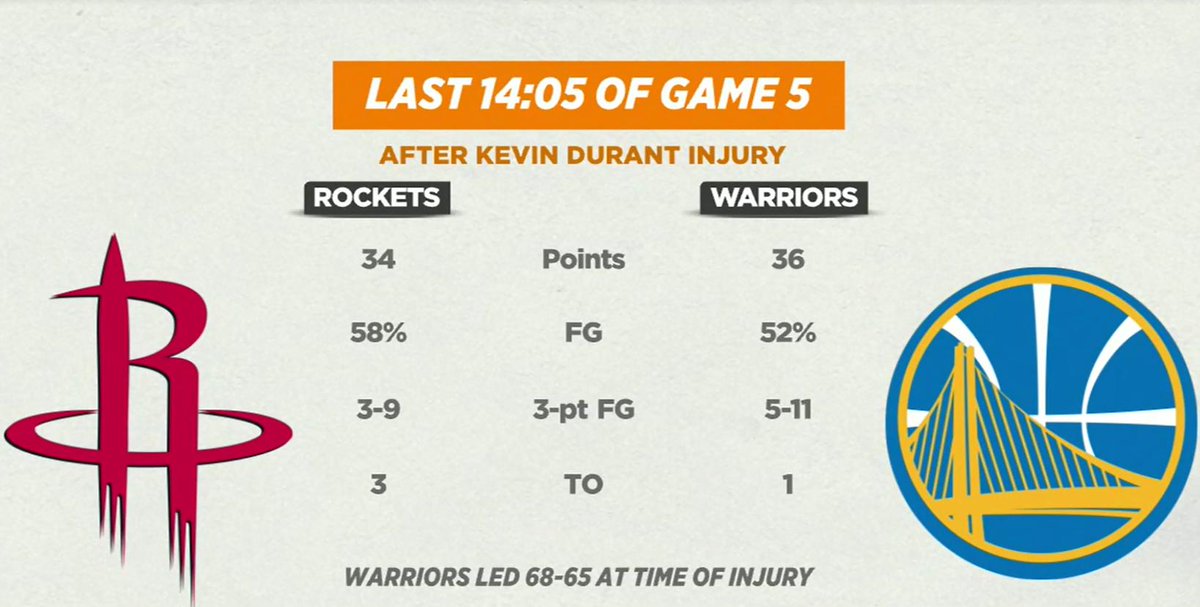 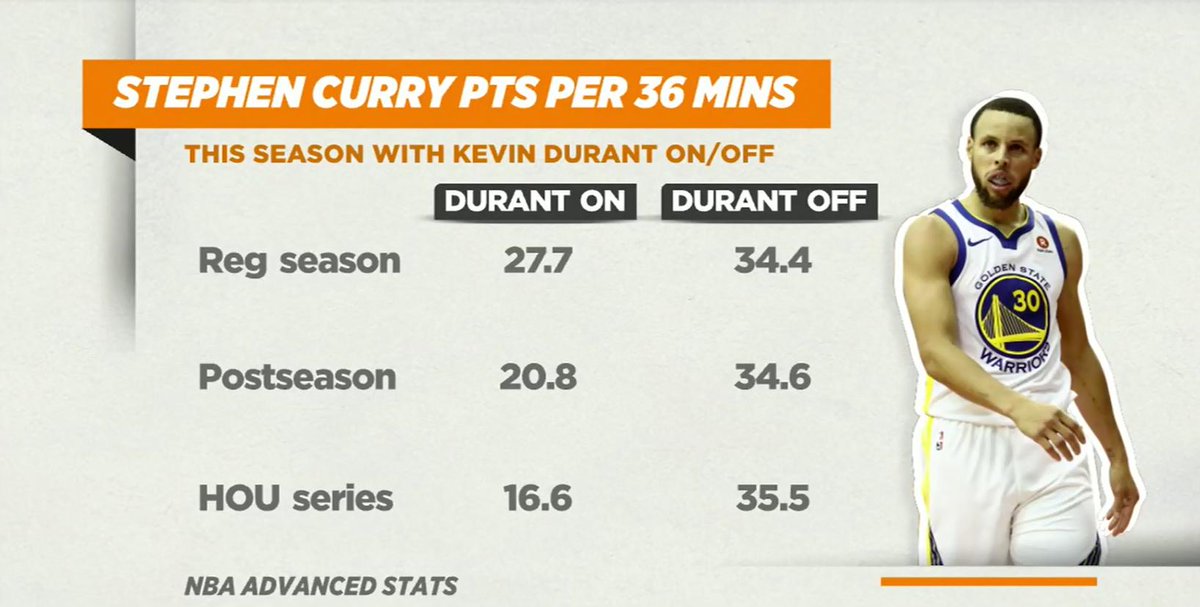 “I still feel confident they can get it, but it’s definitely a lot more even” – Jefferson

“I definitely feel confident. Steph plays better when KD is not on the court. He’s way more explosive on offense, especially against Houston so will get to see him really turn his game up and be the player we know he can be” – Jackson

“They lose Kevin Durant, they’re going to switch to a more movement, fast pace offense. That’s why they are so good and so dominant and why they are a dynasty” – Jefferson

What happened to Harden down the stretch in Game 5?
Houston only scored 18 points in the final 6:24 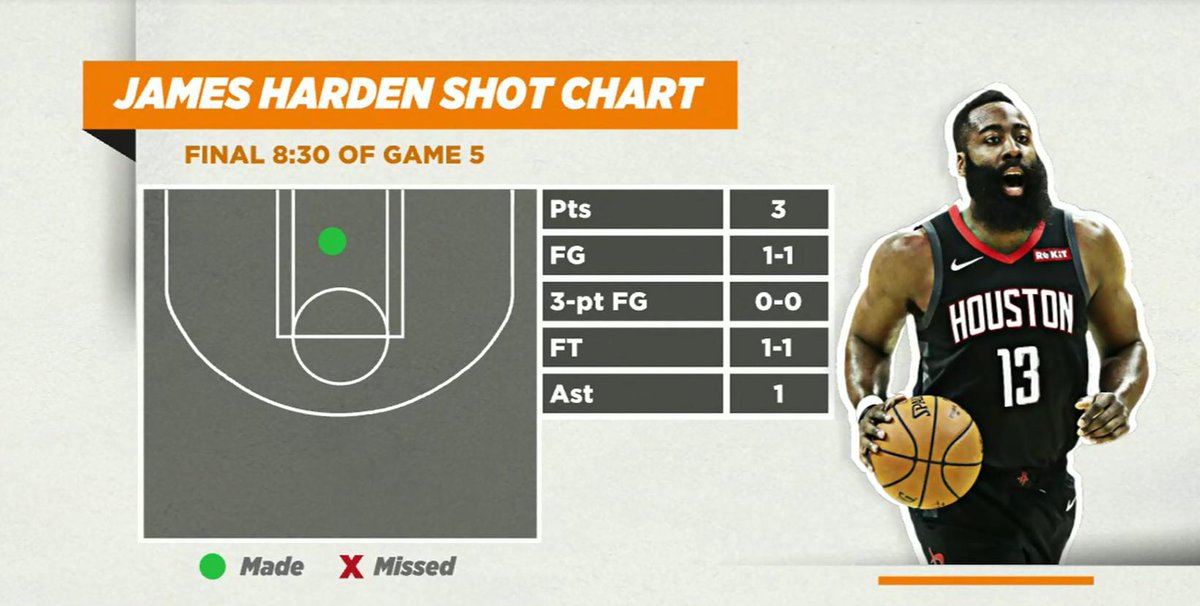 “This was a huge missed opportunity. That was the time for him to be overly aggressive, but he actually went the opposite direction” – Jefferson

“I expected him to be overly aggressive [after KD left the game], especially after coming back from [down] 20 points. Him not coming out and not showing that fire at the end of the game, he’s always going to have that question mark if he really wants it” – Jackson

“I’m a big time James Harden fan. But this is the reason why I will put Greek freak for MVP over him: you don’t see no quit, no rest, no die in the Greek freak and that’s what I love about him” – Jackson

Who’s most to blame for Celtics collapse?

Marcus Smart dismissing the notion that Kyrie was to blame for their struggles:

“All of them. The whole team is to blame. Everybody had their own agendas. This is the same team that made it to the Eastern Conference Finals without Kyrie” – Jackson

“One person not to blame: Gordon Hayward. Brad Stevens should take a little bit and most of the blame.  He didn’t do a great job managing this whole team” – Jefferson

“Kyrie Irving. He wanted to be the leader, wanted his own team. You got to lead by example” – Sedano

“Everyone saw this coming. We wanted to see what the Boston Celtics were going to do under distress and they just weren’t very good” – Jefferson

May 9, 1990 – Michael Jordan driving to the basket and finishing with the tough circus layup, plus the foul vs the Sixers!

New Segment on The Jump!

“It shouldn’t be Vogel” – Jackson

Q3. Did Magic see this coming?

“He was part of this dysfunction and he only added to the dysfunction, 100 percent he saw it coming” – Jefferson

“LeBron has to get control of it. At the end of the day, it’s all going to fall back on him” – Jackson

“He should feel disgusted. He is in a very, very tough spot because he knows he’s out there trying to convince other guys to come play for the Lakers. Meanwhile, the Lakers can’t even get their stuff together” – Jefferson

Golden State’s Kevin Durant has suffered a mild strain on his right calf and expected to be re-evaluated next week, league source tells ESPN.

Per Ramona Shelburne, Durant will not join the team on the trip to Houston

“I think they can. They just need to win one out of two. I’ve never been happier to hear about a calf strain. He is the future of this league” – Jefferson

“I still think they can get it done” – Jackson

ICYMI: The Jump’s new show from within a show…

First priority for Celtics this offseason? 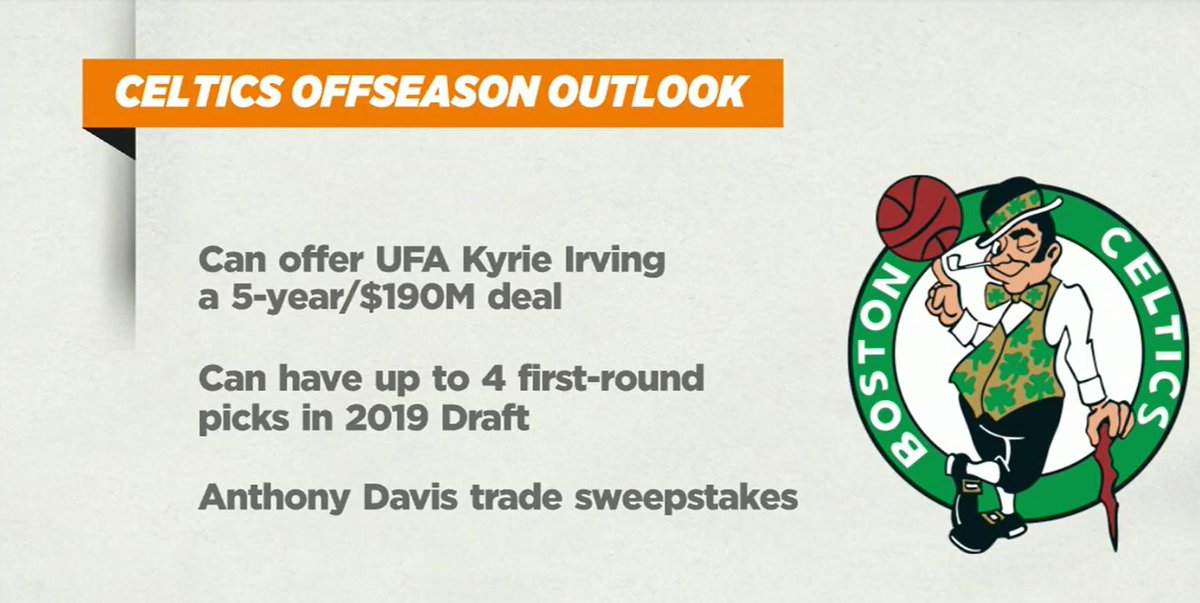 “Signing and trading Kyrie Irving. Get an asset back. This is how good of a job Danny Ainge has done: Even if they lose Kyrie, they have a ton great young building blocks, they’ll still be in the playoffs next year and they’ll have a ton of cap space” – Jefferson

“They sign Kyrie and find a way to get AD. Trade the young guys, but keep Jaylen Brown” – Jackson

Where should Kyrie go in free agency?
Irving allegedly grew up a Nets fan

“He signs [with Boston]. If he doesn’t sign, LA or NY [Knicks or Nets] because it’s a possibility with Jimmy [Butler] too” – Jackson

“He needs to go to the most stable franchise. If he goes to the Knicks or Lakers, they’re just not stable. If you add him to an unstable environment and there’s other drama outside of just basketball, it’s just not going to help him” – Jefferson

Woj: KD diagnosed with calf strain, won’t return for series (Cont’d)
How does playing with KD change things for the Splash Brothers?

“Klay knows he has to be the robin now to batman. He has to come out there and be way more aggressive” – Jackson

“The thing that I like about this situation is that they know how to play without him. Now it’s constant movement for everyone” – Jefferson

Jefferson: Simmons
“If Joel Embiid doesn’t have it, you pull him and and then you just go with a fast pace small ball game which benefits him”

Jackson: Embiid
“He’s been hearing it a lot. They’ve been saying a lot about him. He knows he has to perform because he’s the best player on the team”

Jefferson: Kawhi
“With KD out now, he’s the best player left in the postseason” 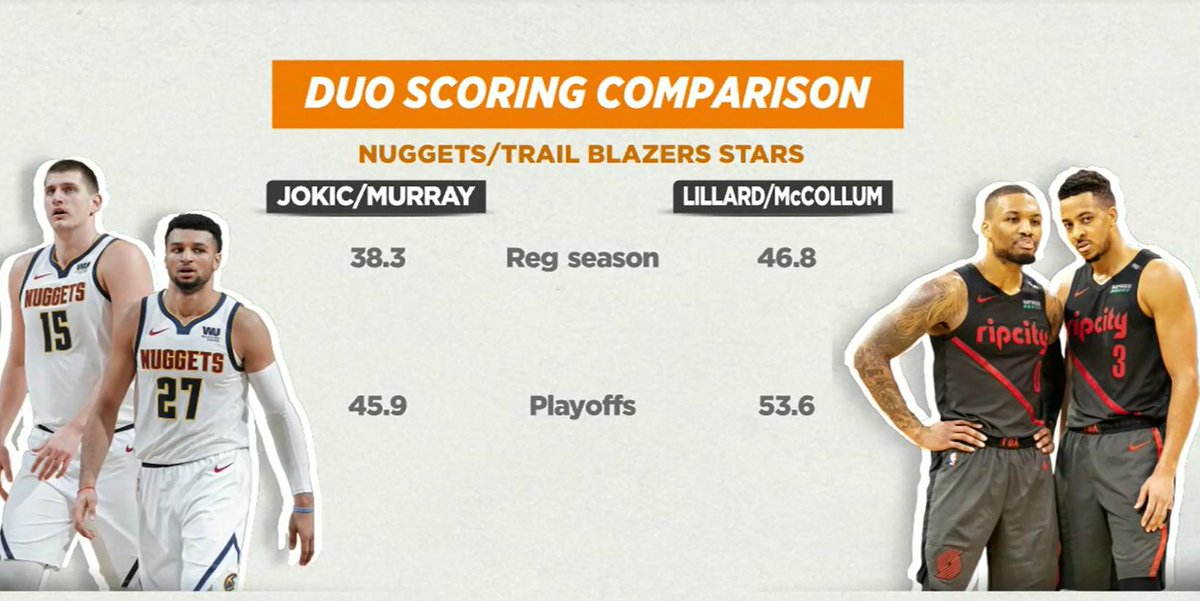 Jefferson: Dame & CJ
“Dame & CJ are right there with Steph/Klay for greatest backcourt of all-time”

Jackson: Jokic & Murray
“Jokic has been so dominant all over the court. He’s the first big guy that we ever heard them say: ‘He makes the right play every time'”

“Yes. He did secure the bag” – Jackson

“He’s going to get the bag, but will it be in Golden State?” – Jefferson

How will Rockets attack splash brothers in Game 6?

“You can trap them a little bit more now. You can trap Steph in a pick-and-roll and you stay at home with Klay, who’s going to score now. It actually puts them in a more difficult spot” – Jefferson

“Bring beach towels and try to keep the splash brothers dry. Just make it difficult for them. KD not being there, they got a lot of pressure on them” – Jackson

Better chance to force a Game 7: 76ers or Blazers?

Sedano: Blazers
“I think they can win this series because of the inexperience of the Denver Nuggets”

“No one cares. Nothing’s going to change. It’s no big deal” – Jefferson