Note: LeBron’s agency, Klutch Sports Group, made the announcement on Twitter 5 minutes after the show went off the air

Think Melo was invited to Westbrook’s party? (Via nas/IG) 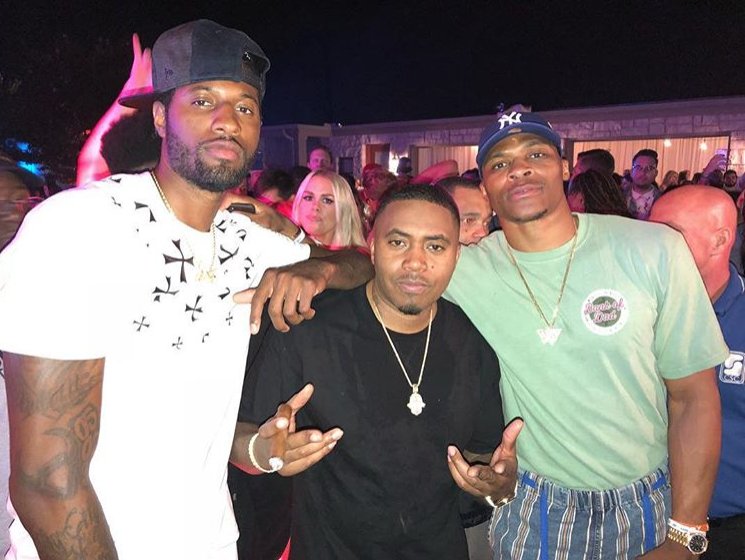 “It’s weird because of obviously the events of yesterday. I’ve kind of felt this whole time that the team that ends up with LeBron is the team that always shows him ‘hey we can do more than just what we have'” – Elhassan

“Basically the Spurs are doing this: they want, if they’re going to trade Kawhi before LeBron commits (getting Kawhi is tied to LeBron), they’re going to basically make you trade for both of them. So they want essentially what the Celtics got from the Nets 5 years ago. They want it all: young players, draft picks, pick swaps” – Windhorst

“Of course they’d put him in the deal. That’s all leveraging and posture” – Elhassan

“I’ve been told by people around Paul that what he’s getting in exchange for giving up that extra year of freedom is the extra year of guaranteed salary in this first current deal, the one who wouldn’t get with a shorter contract and for a guy who shattered his leg a few years ago could have lost his whole career. I was reminded that might be more important than we remember. You’re giving up some freedom for more security, but not all your freedom” – Nichols

“The reason I reacted the way I reacted is because it was a surprising move. It’s going to cost him a little bit of money” – Windhorst

“All that really matters: Paul George wants to be a member of the Thunder and wants to be with Russell Westbrook” – Windhorst

Note: Get used to seeing this until Kawhi gets traded!

Securing the bag; Derrick Rose have the best shoe contract ever?

By being on a NBA roster, DRose’s Adidas contract kicks in and will pay him more than $14.5 Million for the 2018-19 season. He’ll wear the DRose 9 signature shoe this year. https://t.co/A3TAMfntKa

Stability; Mike Budenholzer will be Ilyasova’s 7th different coach with the Bucks!

Can't make this up: Mike Budenholzer will be Ersan Ilyasova's SEVENTH coach with the Milwaukee Bucks alone.

Athleticism; Should T.O. (Terrell Owens) be able to play in BIG3?

Communication; Parsons have the perfect reaction to DeAndre signing?

was it something i said!!?!! https://t.co/fadtWNPRsq

Confidence; Fred VanVleet: “Bet on yourself”

"They want to try to make the playoffs next year. This guy is going to help them" – @WindhorstESPN #NBAFreeAgency #TheJump #SUNSat50 https://t.co/6CaCBRqSnT

How does PG-13 staying affect Lakers pursuit of Kawhi?

Mistake for Clippers not to trade DeAndre?

"The Clippers are dreaming big for 2019" – @WindhorstESPN

"They made it very clear that they wanted to stay competitive. They wanted to make the playoffs" – @DarthAmin#NBAFreeAgency #TheJump #ItTakesEverything https://t.co/XG7J0Mp9s7

How should Rockets handle Clint Capela?

"We have to point out how important he is to the Houston Rockets. He's irreplaceable" – @DarthAmin#NBAFreeAgency #TheJump #Rockets https://t.co/1Sbg6tErT0

"I think a lot of those names are not the Allen Crabbe level" – @DarthAmin#NBAFreeAgency #TheJump https://t.co/aH5wEuo5Fg

"I say two of those five players won't be back with their teams" – @WindhorstESPN #NBAFreeAgency #TheJump https://t.co/aH5wEuo5Fg

What can Blazers do to keep Lillard happy?

"Portland has a star in Damian Lillard. But the supporting cast part. That was poor cap management" – @DarthAmin#NBAFreeAgency #TheJump #RipCity https://t.co/UGTA3vg9Cr

What if Lakers strike out this summer?

"If they don't get LeBron, they're kind of out. They'll overpay someone" – @WindhorstESPN #NBAFreeAgency #TheJump #LakeShow https://t.co/2sSAf7kpIx

"It's not the end of the world if the Lakers don't get LeBron this summer" – @DarthAmin #NBAFreeAgency #TheJump #LakeShow https://t.co/2sSAf7kpIx

Would Boogie be worth the risk for Lakers?

"Boogie only makes sense for you if you get him on a short max contract" – @WindhorstESPN #NBAFreeAgency #TheJump #LakeShow https://t.co/mFL7ltpXbP